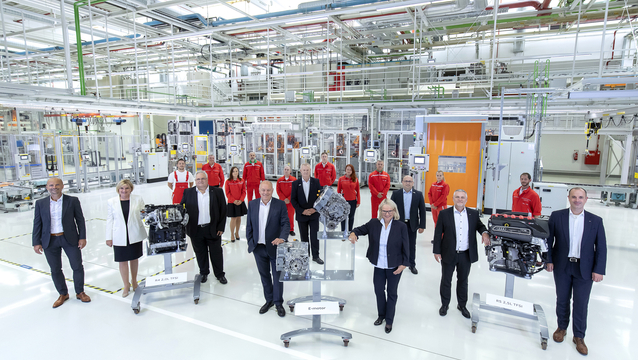 • The 40 millionth engine from Győr was an electric drive
• Peter Kössler, Board Member for Production and Logistics, AUDI AG: “Audi Hungaria has become the electric drive manufacturing centre of the Audi Group, and continues to make steady progress along the path of electromobility”
• Alfons Dintner, Chairman of the Board of Management of Audi Hungaria: “Our highly trained team is ready for the challenges of the future”

Győr, 3 September 2021 – The 40 millionth engine has rolled off Audi Hungaria’s production lines: a 190 horsepower (140 kW) electric drive, which will be transported from the plant to Brussels on CO2-neutral, “green trains”, where it will be installed into a purely electric Audi e-tron model. Audi Hungaria started making engines in 1994, and has grown to become the largest engine manufacturer in the world. 2018 was the beginning of a new era, as Audi Hungaria began series production of electric motors, with over 200,000 units manufactured in Győr to date. In the spirit of electromobility, the company is already preparing to manufacture the next generation of electric motors.

“The manufacturing plant in Győr is a key pillar of the Audi Group's international production network, making major contributions to the success of our Group with its efficient processes, attractive product range and excellent team. As a result, Audi Hungaria has gained an excellent reputation in the production of engines and electric drives in recent years, and will consistently keep on the path it has embarked on,” said Peter Kössler, Board Member for Production and Logistics of AUDI AG.

“As the world's foremost engine manufacturer, Audi Hungaria has nearly 30 years of experience in the production of efficient combustion engines, and as on 2018, we are now expanding into electric drives as well. The completion of our 40 millionth engine is yet more proof of our excellent performance. I am proud of the Audi Hungaria team. Their high level of professional expertise and dedication is what guarantees our preparedness for any future challenges,” added Alfons Dintner, Chairman of the Board of Management of Audi Hungaria.

“This is the era of transitioning to electromobility, and we require cutting-edge technology, established professional expertise and a dedicated team to successfully take on the upcoming challenges. Here at Audi Hungaria, every factor is in place to guarantee our continued success. My team and I stand ready to produce the next 40 million engines, from Győr to the world,” said Robert Buttenhauser, Member of the Board of Directors of Audi Hungaria and Director for Engine Production.

In the spirit of electromobility, Audi Hungaria has been manufacturing electric drives for three years now, and is already making preparations to manufacture the next generation of electric motors. In the future, the electric powertrains for the Group’s purely electric models will be manufactured in Győr, and will be based on the Premium Platform Electric (PPE) platform developed in cooperation with Porsche. A 15,000-square-metre area has been set up in an existing production hall for manufacturing the new engines. 700 employees will be involved in the series production. In addition to powertrain production, a number of additional components such as stators and gearbox components for the new generation of e-motors will also be manufactured here.

The history of engine production at Audi Hungaria began in 1994, with a four-cylinder, five-valve unit. Its engine manufacturing portfolio has been continuously expanding since, with the introduction of new engine types such as CNG engines and electric drives. Audi Hungaria has now grown to become the largest engine manufacturer in the world. The company's employees manufacture almost two million engines annually for the Volkswagen Group's 38 vehicle factories worldwide.